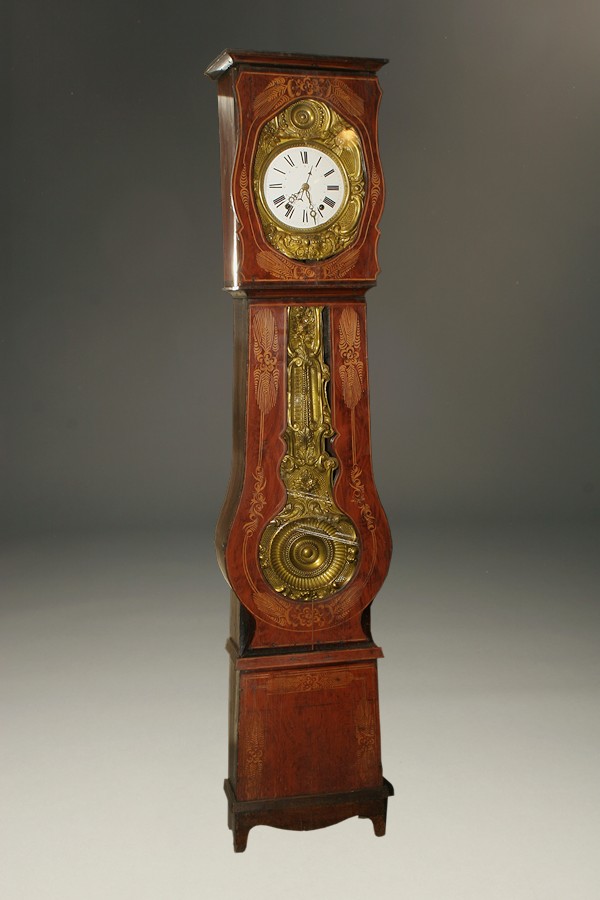 An exceptional example of a “Comtoise” or “Morbier” Tall Case clock, this piece features a pine case hand-painted with a faux-grain made to look like light rosewood. The case was then hand-stenciled for additional decoration. The dial and pendulum were created through the repose technique, where brass sheets are hand-hammered or pressed into molds to create the intricate decorative details. The dial is enameled and includes a 31-day calendar and calendar hand. The clock chimes upon the hour, repeating 2 minutes later in case you missed counting the first chime sequence.

The one week time and strike movement on this clock is wonderful, and comes with an interesting story. The movements of “Comtoise” or “Morbier” clocks were produced in several small towns in the Jura Mountains within the Comte region of France. They were typically made by mountain herders during the winter months, when they were hunkered down passing the time by creating something they could sell. In the spring, they would come down to the markets with wheelbarrows or carts filled with the movements. The long pendulum shafts would often be collapsible to enable easy delivery. The herder’s clocks were referred to as “A Wag on the Wall”, as they consisted only of the movement, pendulum, weights and key. These elements could be hung on the wall as is, though many owners would commission a local cabinetmaker to build a case around it.