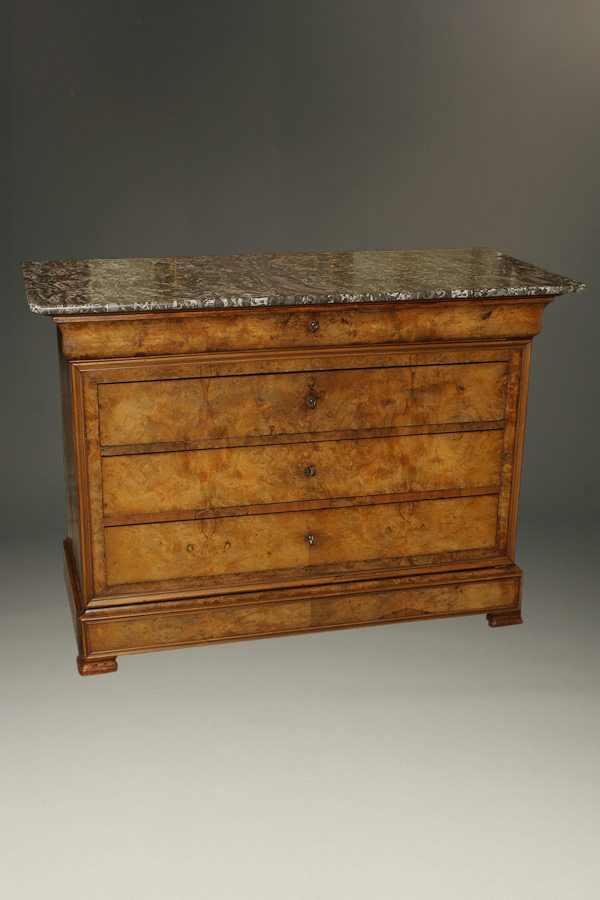 Circa 1860, the highlight of this beautiful antique furniture piece is its bookmatched burr walnut veneer. Originally, burr came from a diseased walnut tree that grew a large wart on its side. Woodworkers discovered the interesting grains inherent in the wood from these warts and wanted to use it in their creations. Burr does not hold its shape well on its own, so they turned it into veneer. In the 19th century, burr became quite popular. However, there were only so many diseased walnut trees, so it also became a rarity. Foresters tried to force the disease on the trees, but the warts take a long time to grow. Then, some smart timber man discovered that a similar grain pattern occurs at ground level as the trunk begins to expand into the root system. This discovery led to the harvesting of the trunks for burr.

Bookmatching is a cabinet-making technique that creates a mirrored grain pattern on a piece. It starts with a pile of veneer, all with slight changes of the same pattern. The cabinetmaker sets a mirror on one of the pieces, slides it back and forth to see the symmetrical pattern within it, and scores the veneer to end up with two pieces that mirror each other. The visual interest and pattern created by this method became a popular premium.

Typical of the Louis Philippe style, named after the conservative French monarch, this commode is clean lined, symmetrical, with no ornate decorations. It has a marble top and features a hidden drawer at the bottom.