This Item is No Longer AvailableSorry, but this item has found a home! 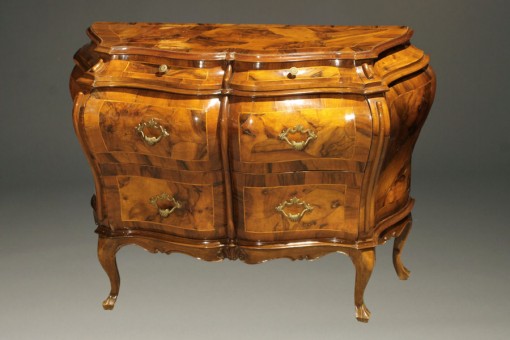 Italian Bombe Commode in Walnut and Burled Walnut – The sumptuous shape of this lovely antique commode comes from the multi-directional curves within its structure. Called compound curves, they differ from single and serpentine curves in that they move both vertically and horizontally. Circa 1920, this piece is indicative of Italian craftsmanship. The Dutch and French would use hot sandbags to create pressure to press the veneer against the shaped substructure of bombe style pieces. The Italians employed a different method, often using little pin nails to temporarily adhere the glued veneer to the substructure. Consequently, this piece has a multitude of little pock marks in the veneer, which look natural to the wood. Earlier Italian woodworkers liked these marks, feeling they add character to their handiwork. Later pieces were not made the same way, so this unique trait was seen less often.

The commode’s rich walnut is accented by a satinwood inlay and burled walnut. The open grain denotes the burl came from the root system of the tree. The top of the piece is quite unique. Unlike most veneered furniture where careful bookmatching was employed, the furniture maker placed random cuts of veneer to create natural flow to the pattern. Bronze hardware adds the finishing touch.