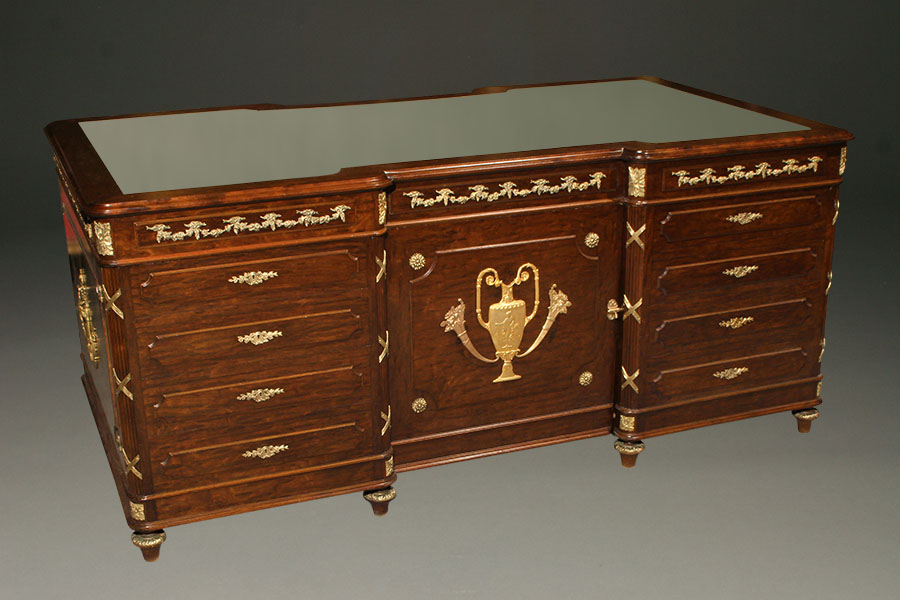 Empire styles, beginning with Napoleon Bonaparte’s First French Empire, was a particularly influential aesthetic throughout Europe and America for much of the 19th Century. The style’s creators wanted to instill pride in the French people for their state and leader, meshing a spread of Greek and Roman details with a simpler aesthetic, neither over-the-top nor strict and austere. It was this combination of richness and modesty that carried into other styles of the day, and later styles of the century.

Succeeding the French Revolution, the neoclassical French Empire Style developed during the “First French Empire”, or Napoleon Bonaparte’s reign. Like many European artistic movements before it, Empire Style drew heavily from ancient Roman and Greek architecture. The prior French style, stern and straight-lined Directoire, was the foundation on which Empire Style expanded, balancing richness and simplicity. It was this aesthetic blend that strongly influenced its contemporaries (such as Regency and Federal styles), as well as inspiring many other movements later in the 19th and 20th centuries. The aim of French architects and artists was to idealize Napoleon and the French State, emphasizing splendor but not in such opulent manners as the frivolous Rococo and the ostentatious Louis XV and XVI styles did. This style would be for the people, not the bourgeois. Charles Percier and Pierre Fontaine were leading French architects and furniture designers in Paris during the 1790s, and are credited as creators of the Empire Style.

One of the many inspired by the French Empire Style, American Empire style marked the second phase of neoclassical styles. Its most notable practitioners were New York cabinet makers Duncan Phyfe and Charles-Honoré. Furniture makers in Boston, Philadelphia, and Baltimore also created excellent regional versions of American Empire Style. The style is characterized by gilt-brass furniture mounts and other brass decorations, diamond and Greek-key patterns, and the use of star and circle shapes. In the more elaborate designs, some incorporated columns with rope-twist carvings, animal-paw feet, fan-shaped leaf motifs known as palmettes or anthemions, acanthus-leaf ornaments, and imitation aged bronze.

As might be guessed from its name, this style is a revival of the earlier French Empire Style. What differentiates Second Empire style is that it gathers and conglomerates more styles than its mainly Greek and Roman-influenced predecessor, resulting in a more elaborate and grandiose character. Baroque, neo-classical, and Renaissance Style all come into play in this late 19th century aesthetic. Perhaps because it was not so long ago, or perhaps because it continues to evoke French pride, Second Empire Style furniture pieces and architecture remain in many rooms and buildings around France today.